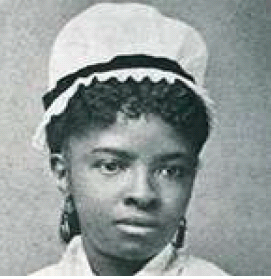 Rebecca Davis Lee Crumpler, an African-American physician and author, was born on February 8, 1831 in Christiana, Delaware to Matilda Webber and Absolum Davis. She was raised in Pennsylvania by an aunt who cared for infirmed neighbors. Rebecca attended West Newton English and Classical School in Massachusetts, one of the G nest secondary schools in the northeast, with students from all over the United States, Hawaii, Paris, Cuba and China. She married

Wyatt Lee, a Virginia native, in April 1852 in Charlestown, Massachusetts and began an eight year career as a nurse. In 1864, after studying at the New England Female Medical College, she became a Doctor of Medicine and was the first

African-American female physician in the United States. In May 1865, in St. John, New Brunswick, Rebecca was again married, this time to Arthur Crumpler, an escaped slave from Virginia. Dr. Crumpler first practiced medicine in Boston, primarily for poor women and children, but at the close of the Civil War she moved to Richmond, Virginia to serve the black community as a medical missionary. In Newcastle and Wilmington Delaware she served as a physician and teacher with the Freedman’s Bureau to provide medical care to freed slaves who were denied treatment by white physicians. She was subject to “intense racism” by both the administration and other physicians: “men doctors snubbed her, druggist balked at filling her prescriptions, majority of pharmacist would not acknowledge the prescriptions she filled and some people wisecracked that the M.D. behind her name stood for nothing more than ‘Mule Driver’.” By 1869, Dr. Crumpler and Arthur had returned to Boston where she later opened a medical practice at 67 Joy Street on Beacon Hill.

The Joy Street neighborhood was a predominantly African-American community at that time. Today, her home on Joy Street is a stop on the Boston Women’s Heritage Trail. Rebecca and Arthur were active members of Twelfh Baptist Church, where Arthur was a trustee, and in mid-December, 1870, their daughter, Lizzie Sinclair Crumpler, was born at their 20 Garden Street home. In 1874, Rebecca spoke at a service for Massachusetts Senator Charles Sumner upon his death. She read a poem that she had written to him. By 1880, Rebecca and Arthur moved to Hyde Park, Massachusetts. On March 9, 1895, she died; Arthur died in 1910. they are both buried at Fairview Cemetery near their residence in Hyde Park. The Hyde Park Branch of the Boston Public Library is currently fundraising for a grave marker for Dr. Crumpler.