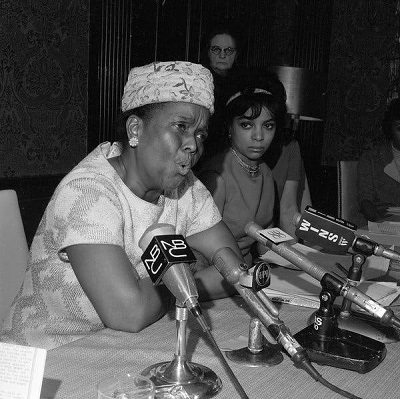 Ella Josephine Baker (1903-1986)
Two thousand twenty marks the 150th Anniversary of the Fifteenth Amendment (1870) which gave the right of black men to vote following the Civil War.  This year’s Black History Month theme recognizes the struggle for voting rights among both black men and women throughout American history.

Ella Josephine Baker was a pivotal behind-the-scenes figure in progressive African American political movements from the Thirties to her death in 1968.  She helped to organize Black cooperative campaigns in Harlem during the Great Depression; worked as a grass-roots organizer and national leader of the National Association for the Advancement of Colored People (NAACP) in the Forties; and served as the first interim director of the Southern Christian Leadership Conference (SCLC) in the Fifties.  She was a colleague and critic of Martin Luther King, Jr., and was one of the founders and chief sources of inspiration for the Students Nonviolent Coordinating Committee (SNCC), which was founded in 1960.  Ella’s life was literally immersed in political activity.  She was affiliated with nearly fifty organizations and coalitions over the course of her life and thus left an indelible mark on twentieth-century African-American political history.

Miss Baker and many of her contemporaries, believed that voting was one key to freedom.  Today, that is still the case; if we do not exercise our collective voice, we are unable to influence the policies and laws that impact our lives.  To be counted, we must be heard.